The Misconceptions of Stock BuyBacks: To Buyback or Pay Dividends?
Free Resources /

U.S. corporations that once issued stock to help finance their growth are now buying that stock back—in record amounts. These buybacks have made headlines recently as pundits have tried to ascribe their increasing use to everything from the market’s climb to a growth in income inequality.

The narrative that’s drawing the most attention is the one that claims buybacks are to blame for stagnant middle-class wage gains and the widening pay gap between fat-cat CEOs and the employees that get the real work done. While it sounds plausible in theory, in practice it’s not as simple (nor as detrimental) as editorial writers and politicians would have you believe.

Let’s go through a few of the misconceptions surrounding stock buybacks and discuss what they ultimately mean for you and your portfolio.

Companies are buying back their stock instead of paying their workers more, contributing to the shrinking middle class.

This first argument sounds like basic logic, but buying back stock and paying your workers is not an either/or situation.

Wages are determined in the marketplace. A company that paid its workers more than their labors were worth would have to raise prices on its goods and services to cover those costs. If it paid them too little, they’d quickly find they had no labor force at all. Either way, the company would be less profitable or cease to earn any profits at all and would be abandoned by its shareholders. The stock would tank.

But the fact is that public companies have been increasing employee salaries and benefits in addition to buying their own shares. According to the U.S. Bureau of Labor Statistics, the total cost of compensation per hour for civilian (non-government and public) companies grew from $24.95 in 2004 to $36.32 in 2018, a 45% increase. Excluding benefits, paychecks alone have risen 40% over the same period.

Blaming the shrinking middle class on the largest public corporations in America is also misguided. The companies that make up the S&P 500 index—the largest companies in the U.S.—only employ 17% of America’s non-government nonfarm workers; small- and medium-sized businesses account for the remaining 83%. And private industry workers are paid 4% less than their counterparts at publicly traded companies, which further blunts the argument that buybacks are dampening salaries.

Worker pay will always be a hot-button issue, yet it’s hard to pin down a single cause for the current dynamic. It may be attributable to managers who are unsure how long the current period of high profits will last, which gives them pause about increasing salaries faster. Instead, companies are making one-time bonus payments to recognize the current good times without locking in permanently higher overhead. For example, PepsiCo gave its manufacturing and delivery employees—whose typical annual pay runs between $29,000 and $37,000—up to $1,000 in bonuses at the beginning of 2018 (2.7% to 3.4% of their salary).

The bottom line: If buybacks were outlawed tomorrow, that money would not automatically be rerouted into higher paychecks. It’s more likely we’d see a big jump in the dividends paid to shareholders.

Companies are buying back their stock instead of reinvesting in the business.

Put simply, this is false.

When investors, analysts and even critics throw around the term “reinvestment,” they are usually talking about capital expenditures (e.g., when a company buys new equipment to make more goods or purchases a new location for a store) or spending on research and development. Spending on these two items is at record highs (in absolute numbers) and has been stable as a percentage of sales over the past 15-plus years—companies are investing in their businesses at a fairly consistent rate. 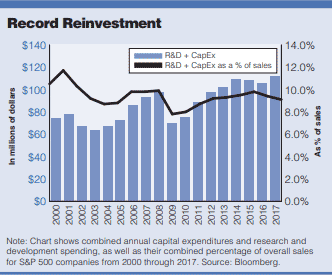 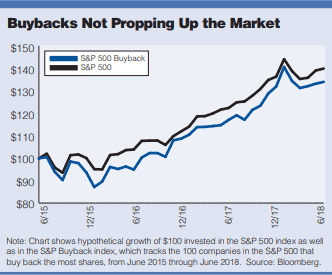 While decreasing the number of outstanding shares in the public marketplace will automatically increase earnings per share—the same amount of income is spread over fewer shares—it doesn’t boost earnings overall. Earnings reflect how well a business is doing; the number of shares outstanding has nothing to do with how earnings are calculated.

Remember, a stock buyback directly returns cash to the owners of the company because sellers receive cash in exchange for their shares. However, it also benefits remaining shareholders, who now own a higher percentage of the company and are entitled to more of the cash it distributes in the future.

Stock buybacks are propping up the stock market.

Companies declaring buyback plans, on average, have seen their stock jump 1% on the date of the announcement. But investors also tend to react favorably when a company announces a dividend increase; from 2006 to 2012, companies that boosted their dividends saw their stock prices rise an average of 1.8% in the three days following the news.

Higher prices following such a move reflect the belief that it benefits shareholders. Buybacks can also signal that company management believes its shares are undervalued.

However, companies that buy back shares are not propping up the broader market. The chart at the top of this column shows that over the last three years, the S&P 500 has outperformed the S&P 500 Buyback index—the index of the 100 S&P 500 companies that have bought back the most shares. 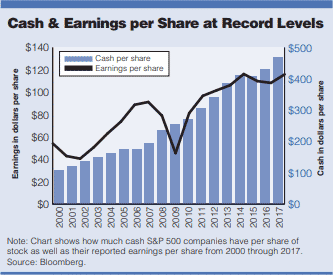 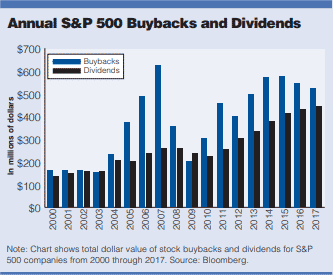 Companies are adding to their financial risk by using debt to both buy back stocks and to issue or increase dividends.

It’s true that some companies are issuing debt to repurchase stocks and raise dividends. But not all companies are—in fact a majority have not. For those that do, however, the business decision centers on how to manage the company’s finances through the sale or repurchase of both stock and bonds. Issuing debt to buy back stock just rearranges that balance and is often done to benefit corporate finances.

For example, interest paid to bondholders is tax-deductible. Dividends are not.

Buybacks in the Headlines

Record stock buybacks reflect today’s record corporate profits. Even the best-managed companies can run out of profitable uses for excess cash. And idle cash on a balance sheet can make a company the target of activist investors who may not have shareholders’ long-term interests at the core of their quick-profit schemes. But as the chart above to the left shows, cash and earnings per share have been increasing since the end of the financial crisis in 2009.

To Buy Back Stock or Pay Dividends?

Whether to repurchase shares (or not) is a capital allocation decision, and it is effectively the same as issuing a dividend. But what goes into the decision to choose one over the other?

Corporate executives like stock buybacks for two reasons. First, they are more tax-efficient than dividends, which are taxed twice, once at the company level and again at the investor level. Not so for buybacks.

Second, traders and investors afford management more flexibility around stock buyback programs than they do dividends. Stock prices typically tumble—by 4% on average—when a company announces it will be cutting a dividend. But companies are often given a pass if they fail to follow through on or complete their buyback plans.

As investors, we prefer dividend payments to buybacks because they are more reliable—they provide a predictable stream of income. As you can see in the chart above, buybacks tend to be tied to the economic cycle, peaking in 2007, falling off during the Great Recession, then picking up again during the current recovery and expansion. Dividends grow at a much steadier pace.

Of course, not all stock buybacks are well-advised. A company that repurchases its stock at an elevated price may be overpaying for those shares.

However, management teams can and often do make poor decisions about other capital allocation plans, including acquisitions, selecting company projects to fund or not and commitments to move into new markets. Not all capital allocation decisions work out. That’s human nature. But buybacks have taken significant, and, in our view, unwarranted criticism of late.

If you’re a shareholder of a company that’s buying its own stock, we suggest you view the event solely in the context of the company’s overall financial standing. Politicized narratives can be powerful, but in our experience they have very little bearing on the strength of an investment. A mental shortcut that may help when you hear someone rail against stock buybacks is to substitute the word “dividend” and see if it still sounds as bad. Stock buybacks typically reward shareholders for owning that stock over the long term—and, as a long-term investor, that’s exactly what you should be seeking.

This material is distributed for information purposes only; it is not financial advice. Speak to your financial adviser for advice specific to your circumstances before taking action. The investment ideas and expressions of opinion may contain certain forward-looking statements and should not be viewed as recommendations or personal investment advice, or considered an offer to buy or sell specific securities. Data and statistics contained in this report are obtained from what we believe to be reliable sources; however, their accuracy, completeness or reliability cannot be guaranteed.

Past performance is not an indication of future returns. The tax information contained herein is general in nature, is provided for informational purposes only, and should not be construed as legal or tax advice. We do not provide legal or tax advice. Always consult an attorney or tax professional regarding your specific legal or tax situation.
© 2019 Adviser Investments, LLC. All Rights Reserved.

Common Misconceptions About Buybacks and How They Impact Your Portfolio

U.S. corporations are buying back shares of their own stockA financial instrument giving the holder a proportion of the ownership and earnings of a company. in record amounts. And pundits are attributing these purchases to everything from the market’s climb to a growth in income inequality. But do those claims hold up to the facts?

In this special report, we take a closer look at stock buybacks and how they do (and do not) impact the stock market and broader economy.

It’s never too soon to be a more informed investor—especially when it comes to timely subjects. Complete the form on this page to receive this free, no-obligation report today!

A copy of Stock Buybacks: Public Enemy Number One? was sent to the email address you provided.

Also, a copy of Stock Buybacks: Public Enemy Number One? has been sent to the email address you provided.