Are Valuations Too High to Stick With Stocks? - Adviser Investments

Are Valuations Too High to Stick With Stocks? 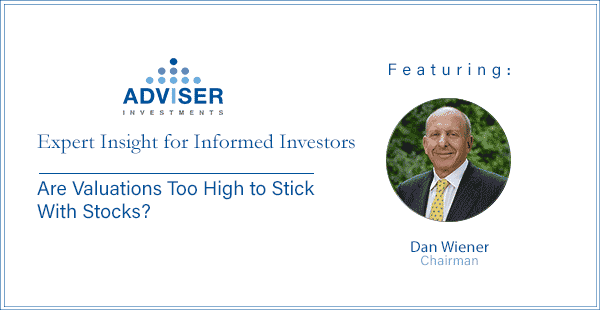 “Bullish” is almost too mild a word to describe the levels of enthusiasm that have helped propel the market to new highs in recent months, even as the broader economy is still recovering from the pandemic. Is it still worth investing in stocksA financial instrument giving the holder a proportion of the ownership and earnings of a company. with valuations so high? And can this bull marketA period during which stock prices rise significantly from recent lows for weeks, months or years. continue to run? In our webinar Rocket or Rollercoaster: Where Will the Markets Go From Here?, Chairman Dan Wiener tackled the subject.

Please enjoy the excerpt below and click here for the full webinar replay to hear more and view some charts that illustrate Dan’s points.

Whether it’s Bitcoin, Dogecoin or the meme stocks that have garnered lots and lots of headlines this year, whatever you want to look at, investors are bullish.

Over the years, we’ve been treated to many ways of measuring whether stocks are expensive or cheap, comparing prices to book valueAn accountant’s estimate of the value of the assets of the company, minus its liabilities. This differs from a company’s market value, which is the prevailing market rate that investors will pay to own the company. earnings, projected earnings, revenues, dividendsA cash payment to investors who own stock in the company., and more. And no matter how often you hear them touted, the fact is, there’s not even one of these common stockA financial instrument giving the holder a proportion of the ownership and earnings of a company. valuation metrics that has accurately predicted the course of stock prices over time.

It’s tougher to earn higher returns when stocks are already historically expensive. That’s clear. But at the same time, it doesn’t mean that investing in stocks when they’re expensive is going to be a losing proposition.

The old saw is, history doesn’t necessarily repeat but that it does rhyme. And as both experienced investors and students of market history, we know that stocks don’t just go up.

So let’s talk a little bit about the market’s track record. Since the pandemic bear marketA period in which stock prices decline significantly from recent highs and remain below previous high marks for weeks or months. Generally, a decline of at least 20% in stock prices is considered the threshold marking the start of a bear market. in the spring of 2020, there hasn’t been a single decline of even 10%, and no drops of even 5% in the current calendar year. Historically, that’s rare. If you examine calendar year returns in the stock market going back to 1980, the stock market hands investors a 14% drawdown on average. That’s a correction every year. And it’s three-quarters of the way to a bear market.

But the thing about averages is that there’s no given year that’s going to look like an average. In fact, over the last 40 years or so, only 2003 saw a drawdown of 14%. And that came as the stock market was trying to recover from the bursting of the tech bubble. StocksA financial instrument giving the holder a proportion of the ownership and earnings of a company. were rising that year, when once again, they took a big dive. It happened early in the year, and no one at that point in 2003 thought the market was going to end the year with a 26% gain.

Contrast that with a year like 2011. Stocks were flat for the year. But over the course of the year, stocks fell 19% at one point in time. Why do I mention this? Because it’s important to understand that A, we’ve been in a golden period of low apparent riskThe probability that an investment will decline in value in the short term, along with the magnitude of that decline. Stocks are often considered riskier than bonds because they have a higher probability of losing money, and they tend to lose more than bonds when they do decline. and high returns. And B, when risk comes back all of a sudden, and you begin to wonder why you’re invested in stocks in the first place, you have to remember that over the long haul, history has shown they make you money.