The Debt Ceiling: A High Stakes Game of Chicken 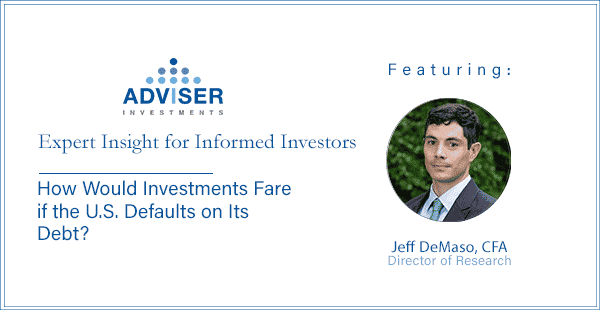 With the U.S. facing an unprecedented default on paying its debt last month, Congress kicked the can down the road to Dec. 3. What could happen to stocksA financial instrument giving the holder a proportion of the ownership and earnings of a company. and bondsA financial instrument representing an IOU from the borrower to the lender. Bond issuers promise to pay bond holders a given amount of interest for a pre-determined amount of time until the loan is repaid in full (otherwise known as the maturity date). Bonds can have a fixed or floating interest rate. Fixed-rate bonds pay out a pre-determined amount of interest each year, while floating-rate bonds can pay higher or lower interest each year depending on prevailing market interest rates. if Capitol Hill is unable to raise the debt ceiling next month? Here’s what Director of Research Jeff DeMaso said in our recent webinar,  Booster Shots, Market Shocks and the End of Fed Intervention:*

Playing chicken with the debt ceiling has become a common tactic in politics, and the Treasury tries to buy Congress time to solve that problem. They extend the road, giving Congress more time to avoid defaulting on the government’s debt. They do this by shutting down parts of the government to rein in costs a little bit. A government shutdown isn’t anything new—and simply put, it’s not a good reason to avoid investing in the stockA financial instrument giving the holder a proportion of the ownership and earnings of a company. market.

The worst decline that came during a government shutdown was around 4%—and that was in the 1970s. If we look at the five most recent shutdowns, stocks gained ground each time; in fact, during the December 2018–January 2019 shutdown, stocks were up over 10%. That’s a pretty good return.

In 2011, Standard and Poor’s downgraded U.S. Treasurys from a AAA rating to a AA rating. Why did they do that? They were concerned about the debt ceiling and said, “Hey, we’re going to review U.S. debt and put it on negative credit watch.” They downgraded the U.S. debt, and you can see that stocks declined in and around that time. That said, the decline didn’t even reach 20%, so it was relatively shallow and the whole episode only lasted nine months or so.

It’s worth remembering that in 2011 there were serious concerns about European debt. This was the “PIIGS” European debt crisis of Portugal, Italy, Ireland, Greece and Spain. They were in the hot seat, so sovereign debt was in the headlines all the time.

The point is that we’re going to hear a lot more about the debt ceiling in the weeks and months to come. Congress only extended funding for the government through early December, but don’t let this keep you from following your long-term investment plan.

Click here for a replay of Booster Shots, Market Shocks and the End of Fed Intervention. Please contact us at (800) 492-6868 to learn more about comprehensive wealth management solutions.

*Webinar recorded after the market closed on Wednesday, October 20, 2021.

Disclaimer: This material is distributed for informational purposes only. The investment ideas and opinions contained herein should not be viewed as recommendations or personal investment advice or considered an offer to buy or sell specific securities. Our statements and opinions are subject to change at any time, without notice, and should be considered only as part of a diversified portfolio. Mutual funds and exchange-traded funds mentioned herein are not necessarily held in client portfolios. Data and statistics contained in this report are obtained from what we believe to be reliable sources; however, their accuracy, completeness or reliability cannot be guaranteed.