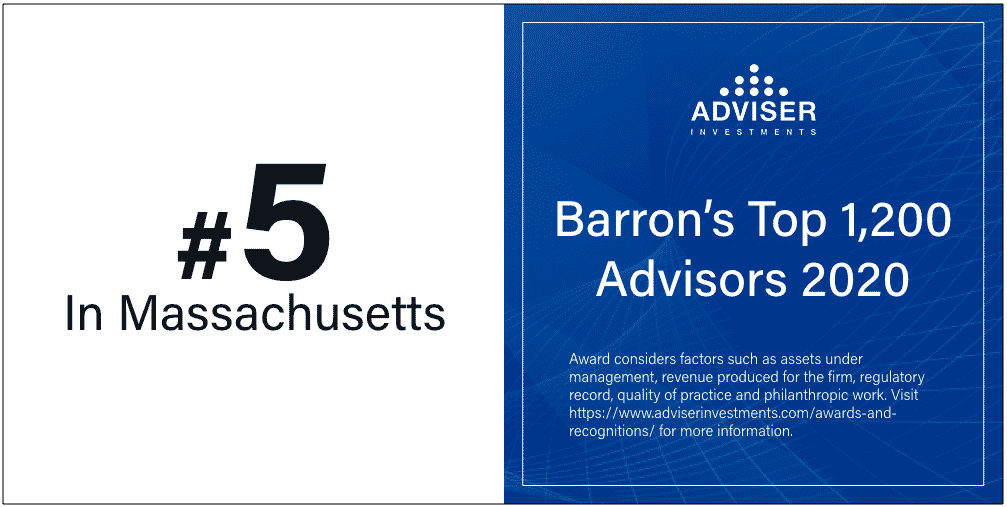 Barron’s “Top 1,200 Financial Advisors” ranking is the magazine’s largest and most comprehensive list, recognizing leading advisers from all 50 states as well as the District of Columbia. The specific number of firms identified from each state is calculated by population and wealth, with Barron’s calculating on the following criteria: Assets under management (AUM), revenue generated by the firm, regulatory record, quality of practice and philanthropic work.

This Barron’s recognition is the just latest among Adviser Investments’ awards. Most recently, the firm was named among the “Top 100 ETFA type of security which allows investors to indirectly invest in an underlying basket of financial instruments (these may include stocks, bonds, commodities or other types of instruments). Shares in an ETF are publicly traded on an exchange, and the price of an ETF’s shares will fluctuate throughout the trading day (traditional mutual funds trade only once a day). For example, one popular ETF tracks the companies in the S&P 500, so buying a share of the ETF gets an investor exposure to all 500 companies in the index. Power Users” by RIA Channel and Forbes, our first year receiving that recognition.

In December, Adviser Investments was also named one of 2019’s “Best Places to Work in Money Management” for the fourth consecutive year by Pensions & Investments. Adviser Investments was one of 76 organizations named to Pensions & Investments’ list, which features the best employers within the wealth management sector. The Financial Times included the company on its “FT 300” list for 2019, which recognizes the nation’s top independent registered investment advisers.

Also in 2019, the National Association for Business Resources (NABR) included Adviser Investments on its Boston’s Best and Brightest Companies To Work For® list—2019 marked the company’s fourth consecutive year achieving this honor. This competition identifies and celebrates organizations that display a commitment to excellence in their human resource practices and employee enrichment. Adviser Investments was also pleased to be recognized among “The Nation’s Best and Brightest for Wellness” for 2019 by NABR, our second year having our efforts to enhance and sustain our employee’s physical and mental health recognized.

Rankings and awards are neither indicative of future performance nor should they be construed as representative of client experience. Adviser Investments, LLC did not pay a fee to participate in any of these rankings or surveys. Top firm and largest firm rankings are not absolute and only rank participating firms that meet respective sponsor’s criteria. These awards are not indicative of client experience or future investment performance. Awards and rankings generally only recognize firms that voluntarily participate and are primarily based on information provided by the recognized firms.

The Barron’s Top Advisor Rankings by State (Massachusetts) (also referred to as Barron’s Top 1,200 Financial Advisors) considers factors such as assets under management, revenue produced for the firm, regulatory record, quality of practice and philanthropic work. According to Barron’s, “around 4,000” advisory firms were considered for this recognition in 2020; with about 1,200 firms receiving recognition. For more information and a complete list of recipients visit https://www.barrons.com/report/top-financial-advisors/1000/2020?mod=article_inline.

The Barron’s Top 100 Independent Wealth Advisors rankings consider factors such as assets under management, revenue produced for the firm, and quality of practice as determined by Barron’s editors. The award sponsor has not disclosed how many firms were surveyed or considered for this recognition, nor the percentage of total participants that ultimately received recognition.

RIA Channel® Top 100 ETF Power Users ranks wealth management firms using exchange traded funds (ETFs) based on aggregate dollar value held as reported on the firm’s September 30, 2019 Form 13F filing with the U.S. Securities & Exchange Commission (“SEC”). Firms are ranked from greatest to least based on total dollar value of ETFs managed on a discretionary basis. Data was collected by RIA Channel affiliate RIA Database, www.riadatabase.com, and final ranking results issued by RIA Channel and Forbes. Ranking does not analyze how ranked firms utilize ETFs or performance. To be considered for the rankings, firms must be domiciled in the United States; be registered with the SEC; primarily manage assets for retail individual clients; and provide comprehensive wealth management and financial planning services. The award is not indicative of client experience nor future investment performance. Adviser Investments did not submit any information to RIA Channel regarding in this ranking, request to be considered for the ranking, nor pay any fee in connection with it. For more information and a complete list of recipients, visit https://www.riachannel.com/top-100-etf-firms-power-user-ranking/.

The Pensions & Investments’ Best Place to Work in Money Management award is conducted by research firm Best Companies Group (BCG). Participating firms and their employees complete surveys assessing corporate culture and communications; role satisfaction; work environment; relationship with supervisor; training; development and resources; pay and benefits; and overall engagement. BCG analyzes the results and ranks participating firms. Participating firms must have an office in the United States; at least 20 employees; have at least $100 million in discretionary regulatory assets under management; and have been in business for at least one year. The award sponsor has not disclosed how many firms were surveyed or considered for this recognition, nor the percentage of total participants that ultimately received recognition. For more information and a complete list of recipients visit www.pionline.com/BPTW2019.

The Financial Times 300 Top Registered Investment Advisers is an independent listing produced annually by the Financial Times and Ignites Research. According to the Financial Times, in 2019, approximately 2,000 firms were invited to be considered for its list; 740 responded with 300 being named to this list. The listing reflects each practice’s performance in six primary areas: Assets under management (70-75% of a firm’s score), asset growth (15% of a firm’s score), years in existence, compliance record, credentials and online accessibility.

The Best and Brightest Companies to Work For® competition recognizes organizations displaying a commitment to human resource practices and employee enrichment. The competition assesses organizations based on categories such as communication, work-life balance, employee education, diversity, recognition, retention and more. The award sponsor has not disclosed how many firms were surveyed or considered for this recognition, nor the percentage of total participants that ultimately received recognition.

Adviser Investments received the Best Wellness Employer Bronze Certification. Sponsored by Wellness Workdays, participating organizations complete a survey covering how the organization assesses its employee wellness initiatives and programs, and how the organization strategizes, implements and evaluates such initiatives and programs. Surveys are reviewed and scored, then participants are ranked in the Best Wellness Employer Score Index and may receive either Gold, Silver or Bronze Certification or an Honorable Mention. Organizations pay a $99 participation fee. The award sponsor has not disclosed how many firms were surveyed or considered for this recognition, nor the percentage of total participants that ultimately received recognition. Visit https://www.wellnessworkdays.com/best-wellness-employer-program for more information.

Visit https://www.adviserinvestments.com/awards-and-recognitions/ for more information on awards and recognition received by Adviser Investments.