Is it Time to Sell? - Adviser Investments

Is it Time to Sell?

The stockA financial instrument giving the holder a proportion of the ownership and earnings of a company. market’s recent roller coaster ride has been difficult for some investors to stomach, with many people selling first and asking questions later. According to the latest figures from the Investment Company Institute, investors pulled more than $30 billion out of stock mutual funds last week, while more than $26 billion poured into money market funds.

These figures demonstrate once again that human psychology, flawed as it is, remains intact. Despite warnings about the folly of making wholesale changes to investment portfolios during times of extreme market volatilityA measure of how large the changes in an asset’s price are. The more volatile an asset, the more likely that its price will experience sharp rises and steep drops over time. The more volatile an asset is, the riskier it is to invest in., many investors are simply unable to contain their emotions. This causes them to sell their stocksA financial instrument giving the holder a proportion of the ownership and earnings of a company. in a panic, often at or near market lows.

Behavioral psychologists call this tendency “loss aversion.” In essence, it means that for many investors, the pain of losing money (even if it’s just paper losses) outweighs the pleasure of potential gains in the future. This causes them to sell everything they own and park their money in cash.

While there is no denying that pulling your money out of the stock market may help you rest a little easier tonight, these emotional reactions to market volatility may lead to sleepless nights in the future. Why? Because when the market recovers, your money will be sitting in cash, earning paltry yieldsYield is a measure of the income on an investment in relation to the price. There are several ways to measure yield. The current yield of a security is the income over the past year (either dividends or coupon payments) divided by the current price.. As stocks climb higher, you will have to decide when the time is right to reinvest in stocks. If you wait too long for the “all clear” signal, you will likely miss most of the run up and invest your money just in time for the market’s next down cycle. Selling at or near the bottom and buying at or near the top is a recipe for certain failure.

This pattern of bad behavior was evident during the economic crisis of late 2008 and early 2009. After Lehman Brothers’ bankruptcy filing in September 2008, stock funds experienced record outflows in October 2008. Another wave of selling occurred in March 2009, just as the S&P 500 Index was bottoming out. What happened next? The S&P 500 experienced a rally of epic proportions over the next year, doubling in value. This rally was a relief to those investors who stayed invested, but it was salt in the wound for those who sat in cash, earning puny yields on their money market funds or CDs.

We’re not suggesting that it’s easy to stay invested when talking heads are stridently stoking the fires of fear. When your retirement savings are tied to the fate of the stock market, it’s perfectly reasonable to be concerned. But that doesn’t mean it’s time to dismantle your portfolio for some temporary psychological relief. As numerous studies have demonstrated, time in the market, not market timing, is the key to long-term success.

Since 1926, the stock market (as measured by the S&P 500) has had positive returns in 61 out of 85 calendar years. That’s a success rate of nearly 72%. Many of these gains have occurred during relatively concentrated periods. If you’re hiding out in cash when the market rallies, your long-term results will likely trail the market averages. The graph below, which is based on the returns of the Vanguard 500 Index fund over the past 35 years, demonstrates what can happen to your long-term earnings potential when you miss market rallies. 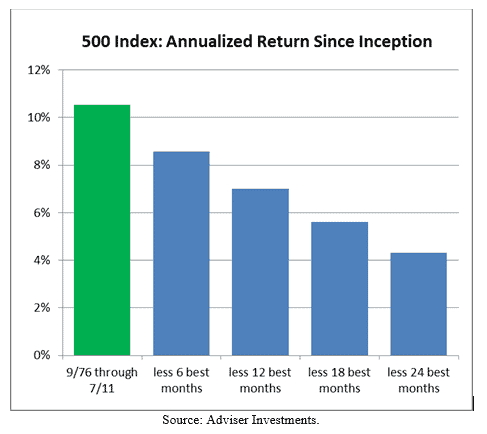 As you can see in the chart, the investor who stayed in the market through thick and thin achieved an average annual return of 10.5%. The investors who missed the market’s best six, 12, 18 and 24 months earned an average of 8.6%, 7.0%, 5.6% and 4.3% a year, respectively. To put that in dollar terms, take a look at the table below, which shows the hypothetical growth of $10,000 in each of the scenarios charted above.

It bears mentioning that the values in the table are the worst-case results of market timing gone awry, but the outcomes are a good example of the costs of missing the market’s strongest rallies. Out of the 419 months (nearly 35 years) of 500 Index’s performance history, missing the six best represented a loss of over $160,000, while missing the 24 best months resulted in a difference of over $290,000 from what one could have earned by just staying put. We think numbers like that represent a pretty convincing argument against timing the market.

We do not believe that the extreme volatility of the past few weeks signals another imminent financial crisis. In fact, the only true resemblance to the 2008 crisis has been the tendency of some investors to shoot first and ask questions later, if at all. The current situation appears to be more of a crisis of confidence in our political leadership, our nation’s economy and the global economy.

In our view, stocks appear cheap. Price-to-book ratios, earnings yields, price-to-earnings ratios and other measures indicate this sell-off has created more opportunities for long-term investors than pitfalls. With the yieldYield is a measure of the income on an investment in relation to the price. There are several ways to measure yield. The current yield of a security is the income over the past year (either dividends or coupon payments) divided by the current price. on blue chip stocks surpassing the yield on the 10-year Treasury by nearly two-fold, opportunities abound for large multinational corporations with global reach. This does not mean stocks cannot get cheaper in the near term. But it does mean that those who favor selling now are pinning their hopes on fear, not fundamentals.

We recognize that recent extreme volatility has been difficult to stomach and that it feels like a bad time to be invested in the stock market. Some may say that the worst of the selling may have already occurred, but there is no way to know that. In fact, it could be months before we get to the other side of this current maelstrom. Nevertheless, we don’t recommend making wholesale portfolio changes in response to short-term volatility.

At times like these, proven experience, judgment and discipline are the keys to success. If you’re among those who are likely to scream, “Stop the ride, I want to get off!” every time the market plunges, call us at 800-492-6868 and we can help you separate emotions from economic reality.

About Adviser Investments
Adviser Investments operates as an independent, professional wealth management firm with expertise in Fidelity and Vanguard funds, actively managed mutual funds, ETFsA type of security which allows investors to indirectly invest in an underlying basket of financial instruments (these may include stocks, bonds, commodities or other types of instruments). Shares in an ETF are publicly traded on an exchange, and the price of an ETF’s shares will fluctuate throughout the trading day (traditional mutual funds trade only once a day). For example, one popular ETF tracks the companies in the S&P 500, so buying a share of the ETF gets an investor exposure to all 500 companies in the index., fixed-income investing, tactical strategies and financial planning. Our investment professionals focus on helping individual investors, trusts, foundations and institutions meet their investment goals. Our minimum account size is $350,000. For the fifth consecutive year, Adviser Investments was named to Barron’s list of the top 100 independent financial advisers nationwide and its list of the top advisory firms in Massachusetts in 2017. We have also been recognized on the Financial Times 300 Top Registered Investment Advisers list in 2014, 2015 and 2016.