Why You Should Focus on Market Cycles, Not Election Cycles
Free Resources /

Set against global economic uncertainty and dire electioneering forecasts for the worst of times here, it’s hard to stay focused on the evidence for continued slow growth (not no growth) in the U.S.

The 2020 primary-to-presidential election campaign is provoking more concern about our country’s future than any in recent memory. But amid heated rhetoric and lofty promises, we will not be deterred from our well-reasoned, evidence-backed investment discipline.

In this exclusive report, we’ll discuss why, from an investing standpoint, you can mostly ignore all the melodrama leading up to and through 2020’s election outcome.

Voters will have plenty of personal reasons for choosing one party’s candidate over the other next year. However, in terms of investment performance, history clearly shows that both Democrats and Republicans could rightly argue that their candidates spur better market gains while they’re in power (or in the years that follow) as a result of policies they’ve implemented.

What we know: Our analysis suggests that markets have tended to rise regardless of who resides in the White House. Either party can (and will) claim credit for producing these long term investment gains, even if those gains do not appear to be significantly impacted by policy. Here are a few ways the data can be spun:

The “facts” bolster our investment view that staying focused on economic and market cycles—not to mention investing in top-notch managers who know how to defend and profit in them—is far more important than obsessing over any single presidential candidate or election year.

We Vote for Long-Term Investment Success

While we’ve sliced and diced the election-related data many ways, even a century-plus of U.S. presidential election cycles represents a small enough sample size to fall short of statistical significance; some of the scenarios we’ve mentioned have only played out a handful of times since 1901. The numbers may make for some lively conversation around the dinner table, but we view them as anecdotal at best. 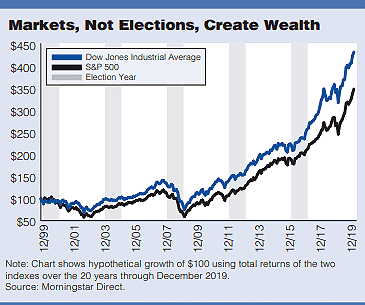 Most important: Keep in mind that the election’s biggest influence on Wall Street volatility will likely come in the months leading up to Election Day. While some level of uncertainty is endemic to investing—be it doubt about elections, earnings, foreign economic policy or any other crisis du jour—it unfailingly gives traders the jitters and newspapers their headlines.

At Adviser Investments, we are not day traders nor are our investment decisions based on headline news. In fact, while it may feel like the last few months (let alone the last few years) have been difficult times to invest, we know that it’s times like these that create long-term wealth.

Political rhetoric is poised to get even more volatile—and we think the potential for a spillover effect of increased market volatility is highly probable, but unlikely to be durable. Post-November 2020, when the election results are in, Wall Street will swiftly return its focus to interest rates and earnings, two factors that have more to do with how stocks perform in the long term than anything else.

Of course, there will be enduring attention to political issues and other concerns, but ultimately, the pace of economic expansion and earnings growth will drive the future direction of the stock markets.

Buy the Managers, Not the Pundits

Our manager-focused, diversified investment discipline is far more attuned to the market and economic facts we know rather than any political promises being made.

Adviser Investments has always taken a long-term investment view. Presidents will change and political parties will rotate through the halls of power, but we are united in our commitment to helping you preserve your savings and achieve your financial goals. Who wouldn’t vote for that?

This material is distributed for informational purposes only. The investment ideas and expressions of opinion may contain certain forward-looking statements and should not be viewed as recommendations or personal investment advice, or considered an offer to buy or sell specific securities. Data and statistics contained in this report are obtained from what we believe to be reliable sources; however, their accuracy, completeness or reliability cannot be guaranteed.

The Adviser You Can Talk To Podcast is a registered trademark of Adviser Investments, LLC.

In November 2020, voters opted to send former Vice President Joe Biden to the White House. Does the change in the Oval Office matter for your portfolio?

Investors and traders commonly wonder how markets will be impacted by election results—candidates set lofty expectations for their performance and predict disaster if their opponent prevails. This makes it hard to avoid worrying about the prospects for your portfolio should your candidate lose.

Our special report, Focus on Market Cycles, Not Election Cycles, available exclusively from Adviser Investments, cuts through the campaign promises and gets down to the facts. In it, we compare stockA financial instrument giving the holder a proportion of the ownership and earnings of a company. returns during each party’s time in office to show how markets have performed over the long-term under both Democratic and Republican administrations.

It’s never too soon to learn more about the riskThe probability that an investment will decline in value in the short term, along with the magnitude of that decline. Stocks are often considered riskier than bonds because they have a higher probability of losing money, and they tend to lose more than bonds when they do decline. politics poses to your investment portfolio. Please complete the form on this page to receive this free, no-obligation special report today!

A copy of Focus on Market Cycles, Not Election Cycles was sent to the email address you provided.

Also, a copy of Focus on Market Cycles, Not Election Cycles has been sent to the email address you provided.