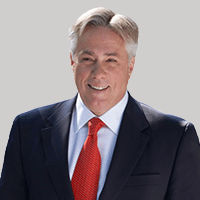 The founding publisher of The Independent Adviser for Vanguard Investors, David co-founded Adviser Investments. David left Adviser Investments to serve our country as the U.S. Ambassador to Italy and the Republic of San Marino from 2009 to 2013. Over a 30-year career, David has been an investor and entrepreneur in a wide variety of business ventures, including marketing consulting, real estate, publishing and financial services. In 2004, he sold his publishing business to Martha Stewart Omnimedia. David is a former President and board member of the Institute of Contemporary Art in Boston and led the design oversight team for its new building in Boston. He graduated from Yale University in 1966 with a B.A. in American history and received a master’s degree in journalism from Columbia University in 1971. David served in the U.S. Navy from 1966-1970 and edited The New Soldier (Macmillan, 1971).