Will Market Volatility Spike in the Months Ahead? - Adviser Investments

Will Market Volatility Spike in the Months Ahead? 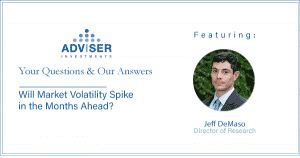 Isaac Newton may have thought that what goes up must come down, but a look at the S&P 500’s performance over the past year suggests today’s stockA financial instrument giving the holder a proportion of the ownership and earnings of a company. traders disagree with him. In our webinar Rocket or Rollercoaster: Where Will the Markets Go From Here?, Director of Research Jeff DeMaso discussed whether we’ll see more volatilityA measure of how large the changes in an asset’s price are. The more volatile an asset, the more likely that its price will experience sharp rises and steep drops over time. The more volatile an asset is, the riskier it is to invest in. in the market for the rest of the year.

I just don’t think that the market goes up in a straight line. But that doesn’t mean that the market has to crash back to earth like a rocket. We’re going to have some ups and downs and twists and turns. But the market can still gain ground even if the ride is bumpier.

Let me give you a few reasons why I think we might be on a rollercoaster.

The pandemic economic shutdown made most of the economic data nearly unusable. I don’t need to remind anyone that last year we just flipped the switch, shutting down the economy in an attempt to contain the spread of COVID-19. The economic numbers then were pretty bleak. Fortunately, the downturn didn’t last too long.

In fact, according to the National Bureau for Economic Research (NBER)—the scorekeeper for recessions and expansions—it was the shortest recession on record, lasting just two months: March and April of 2020. Still, that economic shutdown and the strong rebound we’ve seen are skewing all of the numbers, particularly when they’re compared to the numbers reported a year ago.

And that’s why we say that we’re in this “silly season” for economic data. I expect we’re going to see a big number when we get our first look at second-quarter GDP. We’re going to get economic growth of 7%, 8%, 9% most likely, which is just enormous when we’re talking about a $23 trillion economy. And I don’t think that level is sustainable.

To understand just how the economic data is on a rollercoaster, consider the jobs that we’ve lost or created since the late 1980s—but really focus on the last two years, where the numbers are just dramatically different than we’ve seen before. We’ve added nearly 10 million jobs to the economy over the last year. We almost hit 15 million jobs if you go back to a few months ago. And that’s clearly better than anything we’ve seen in the past 30 years. But just in the previous year, we’ve lost 20 million jobs, which is easily the worst that we’ve seen.

Here’s another example of why we’re in the silly season for data: Retail sales are up nearly 20% over the last year. Just a few months ago, they were up 50%. Again, that’s a really big outlier. We’re only getting those massive numbers because we’re comparing data to depressed levels from a year ago.

We keep asking ourselves how traders and investors will adjust to seeing normal economic data again. Even if retail sales keep growing, even if we’re adding more jobs, will traders be disappointed if we’re not seeing record gains? I do expect to see growth ahead; but those 50% or 10% year-over-year, quarter-over-quarter numbers are going to be much harder to come by.