We’re established critics of the “more managers is better” philosophy that Vanguard has applied to many of its actively managed funds, so we applauded the fund giant’s March 20 announcement that it would be cutting loose two managers from its Explorer fund. It’s a small step in the right direction, but manager bloat remains a concern.
Vanguard axed two long-tenured sub-advisers—Granahan Investment Management and Kalmar Investment Advisers—while adding a new manager, ClearBridge Investments. The move trims the Explorer sub-adviser ranks at Explorer from six to five, and comes after the December firing of another management group, Chartwell Investment Partners. Kalmar may have seen the writing on the wall when it was removed from Morgan Growth in early 2016.
Explorer, a small- and mid-cap growth stockA stock whose issuing company is expected to grow at a significantly higher rate than the market. fund, has utilized a multimanager approach since 1990. The approximately 25% of fund assets managed by Granahan and Kalmar will be reallocated to Stephens Investment Management Group (SIMG), ClearBridge and Vanguard’s Quantitative EquityThe amount of money that would be returned to shareholders if a company’s assets were sold off and all its debt repaid. Group (QEG).
Assets are not equally allocated among the five remaining sub-advisers: Wellington Management Company manages 34%, QEG 18%, Arrowpoint Asset Management 15%, ClearBridge 15% and SIMG 14%. About 4% of the portfolio is in cash.
The fresh face, ClearBridge, is a New York-based firm that was founded in 1962, and its small-/mid-cap team will invest the firm’s portion of Explorer’s assets in quality growth companies that are category leaders (or demonstrate the potential to become market leaders). Day-to-day management will be overseen by four ClearBridge fund managers.
As of December 31, 2016, ClearBridge had $97 billion invested in nearly 1,200 companies, with a bent toward tech, health care and consumer stocksA financial instrument giving the holder a proportion of the ownership and earnings of a company..
So after years of sitting on its hands, it appears that Vanguard is continuing to be “active” with its management of the fund after giving the pink slip to Chartwell last December and Century Capital Management in January 2016. We’d also note that only one of Vanguard’s directors owns shares in Explorer; disappointing to see, but appropriate given how poorly the fund has performed compared to its benchmark over time (see chart below).
Explorer has long been dragged down by multiple sub-advisers, and in the past, Vanguard opted to add additional managers rather than shut the fund down to limit assets. While the recent firings are a step in the right direction, there are still too many chefs in Explorer’s kitchen from where we sit; 12 managers from five different firms means no single manager can add too much of a performance pop. 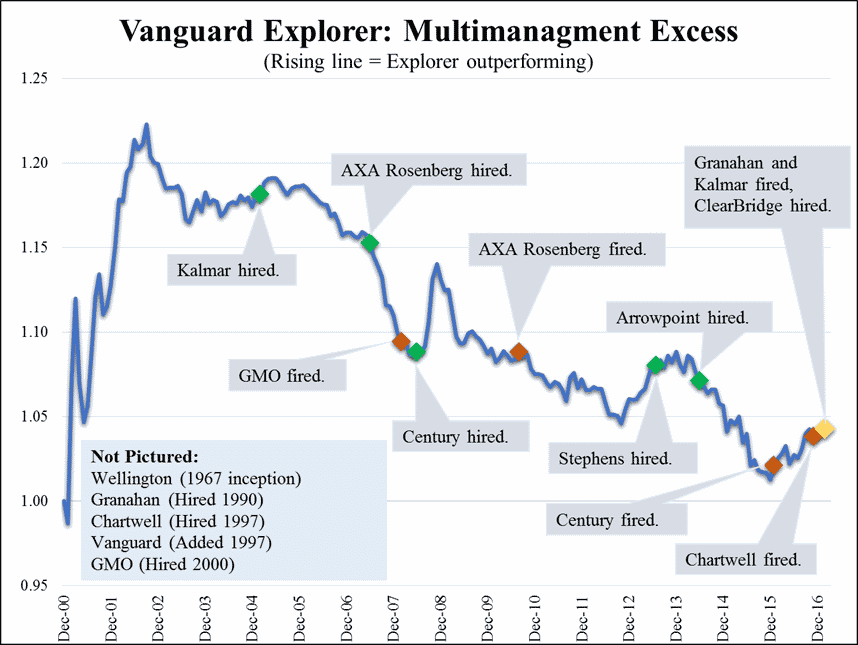 Note: Chart shows relative performance of Vanguard Explorer versus Russell 2500 Growth index. Sources: Adviser Investments, Morningstar.
But Vanguard putting a manager-heavy fund on a diet is only one part of the story. This firing is a huge blow to both Granahan and Kalmar. According to Explorer’s previous prospectus, Granahan managed $3.1 billion as a firm as of October 31, 2016, while Kalmar oversaw $2.2 billion. Each firm managed 13% of Explorer’s $11.9 billion portfolio, or $1.5 billion. Which is to say, their relationships with Vanguard, which in Granahan’s case stretches back to 1990, was a huge chunk of their business.
Of course, Vanguard’s obligation is to its funds’ shareholders—not to the sub-advisers picking stocks for those funds—and Vanguard has a record of being a long-term partner with the firms it hires. This is a good reminder that even patient clients don’t stick around forever. Granahan and Kalmar just saw their largest client pack up and leave.
And we’re still unconvinced that the multimanager approach is a winner. Why invest in Explorer to get worse than index-like returns while paying active management fees? Count us out.