Time for Investors to Consider Cash? 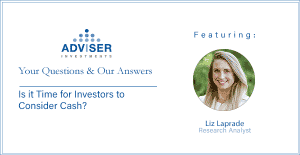 The stockA financial instrument giving the holder a proportion of the ownership and earnings of a company. market has had a remarkable run-up, and many think it’s more than due for a correction. For loss-conscious investors, does that make now a good time to cash out?  In our webinar Rocket or Rollercoaster: Where Will the Markets Go From Here?, Research Analyst Liz Laprade talked about the pros and cons of going to cash.

It’s been a crazy 16 months for the markets. We’ve been through a recession, a recovery, an election, a pandemic. And that’s a lot in a very short timeframe. And given we’ve talked a lot tonight about how markets won’t always go up at this pace forever, going to cash is a fair question.

That all being said, though, if we went to cash every time markets were on a rally, or when things seem to be really volatile, investors would miss out on a lot of good performance. I think a great example would be last March. Last March, here in the United States, the entire economy was shutting down, economies globally had already started shutting down, and the markets were sliding day after day.

If there was ever a time to think about going to cash, it was probably then. For example’s sake, say I went to cash on March 13th, 2020—that’s around when everything shut down here where I am in Boston. And if I’d stayed in cash until I saw any type of crash later in the year, I’d have missed out on some of that initial decline.

But overall, I would also have missed a total return of 67%, comparing market returns on March 13, 2020 to now. Because I’d technically probably still be in cash today, given that there wasn’t another major crash in 2020, no clear signal that it was now safe to return. So while even I sometimes can feel the panic from the markets, I try to remind myself that investing for the long term takes patience and some discipline.