Bitcoin and Crypto: Overvalued or Not? - Adviser Investments

Bitcoin and Crypto: Overvalued or Not? 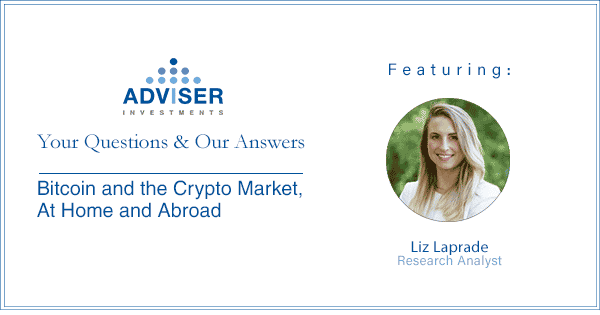 For the second time in less than five years, Bitcoin has seen its price skyrocket amid massive volatilityA measure of how large the changes in an asset’s price are. The more volatile an asset, the more likely that its price will experience sharp rises and steep drops over time. The more volatile an asset is, the riskier it is to invest in.. And there’s more to the crypto market than Bitcoin alone; China is even said to be considering creating its own digital currency. Research Analyst Liz Laprade examined the latest developments in crypto during our recent webinar,* Inflation, Inoculation and Infrastructure: Defining the New Normal.

We have been hearing a lot about crypto and bitcoin over the last year or so. And for good reason. From the beginning of January 2020 to today, the price of  Bitcoin is up over 600%…but I don’t think the story is just about the crazy price appreciation.

I think what’s also dominated headlines is this broader adoption, meaning we’ve seen financial institutions and systems start to incorporate Bitcoin. We saw, for example, PayPal, the payment system, start to accept bitcoin. We saw CEOs start buying Bitcoin on their balance sheet. We even recently saw Morgan Stanley launch funds in which you can now own Bitcoin. It started to creep into our world or become more ingrained over the last year.

So,  when it comes to a possible [price] collapse, when I see something shoot up in price the way Bitcoin did I’m always a little skeptical that it can last. Then on top of that, there’s not really a fundamental value beneath Bitcoin—no earnings, no revenues, no federal government behind it.

It’s really just what you are willing to pay me for it at any given day, so we have seen volatility. Even though it’s up over some 600%, last March it was down 30%. Two weekends ago, just overnight, it went down 14%.

I will say that, with broader adoption,  we are building some fundamentals under that value, so I don’t know that we’d see it crash like we saw in 2017. I think the biggest riskThe probability that an investment will decline in value in the short term, along with the magnitude of that decline. Stocks are often considered riskier than bonds because they have a higher probability of losing money, and they tend to lose more than bonds when they do decline. to the cryptocurrency right now is regulation. I still stand by not investing more than you might be willing to lose.

That takes me to China. China has been investing resources behind developing a digital currency since about 2014, and it’s hit the news more so recently because they did some trial runs with the digital yuan in parts of China, and that triggered thoughts of, “What’s going to happen to the U.S. dollar or the global payment systems?”

From what I’ve come to understand about the digital yuan, I think that the impact of a full launch would be somewhat isolated to China. I think Chinese citizens would definitely use it, but I don’t know if that would translate directly into global use.

For one thing, it is built and monitored by an authoritarian government. Secondly, from a global transaction trade standpoint, the yuan doesn’t comprise a lot of transactions. It’s actually quite small. So, yes, maybe there’s this new, smoother, cheaper, digital currency, but that doesn’t, for me, translate into an immediate turn to heightened demand or even the option to transact in the yuan—it’s still the yuan. I do think, though, it’s going to be an interesting experiment for other central banks to watch develop if the future is a digital currency.

Click here for a replay of Inflation, Inoculation and Infrastructure: Defining the New Normal. Please contact us at (800) 492-6868 to learn more about comprehensive wealth management solutions.

*Webinar recorded after the market closed on Wednesday, April 28, 2021.