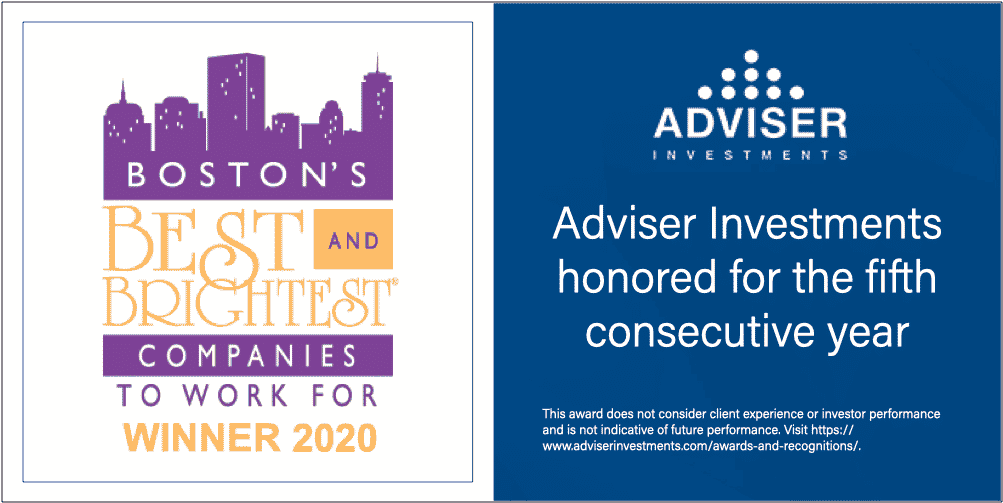 On October 12, 2020, Adviser Investments announced that it has received a 2020 Boston’s Best and Brightest Companies to Work For® award. The firm has made the list every year since it was first published five years ago.

The Boston’s Best and Brightest Companies to Work For® competition identifies and lauds Boston based organizations that display a commitment to excellence in their human resource practices and employee enrichment. An independent research firm assesses each company’s contest entry based on categories such as communication, work-life balance, employee education, diversity, recognition, retention and more.

“Through the first half of 2020, the Best and Brightest Companies To Work For® have demonstrated leadership and forward thinking as they pivoted their business and workforce through COVID-19,” said Jennifer Kluge, President and CEO, Best and Brightest Programs.

“As the conversation and focus has shifted, our Best and Brightest winning companies have also been a voice for important actions regarding race relations,” Kluge continued. “In these unique times, the Best and Brightest Companies To Work For excel and share their knowledge with others.”

Congratulations to all of our fellow Boston “Best and Brightest” companies. See you next year!

The Boston’s Best and Brightest Companies to Work For® competition recognizes organizations displaying a commitment to human resource practices and employee enrichment. Only companies that voluntarily participate are considered for recognition. The competition assesses participating organizations based on categories such as communication, work-life balance, employee education, diversity, recognition, retention and more. Participating companies are then benchmarked against participants both regionally and nationally. Award is not indicative of future investment performance nor represents client experience.

The Barron’s America’s Best Independent Advisors rankings consider factors such as assets under management, revenue produced for the firm, and quality of practice as determined by Barron’s editors. The award sponsor has not disclosed how many firms were surveyed or considered for this recognition, nor the percentage of total participants that ultimately received recognition. Prior to 2019 the award was called the Barron’s Top 100 Independent Wealth Advisors.

The Barron’s Top Advisor Rankings by State (Massachusetts) (also referred to as Barron’s Top 1,200 Financial Advisors) considers factors such as assets under management, revenue produced for the firm, regulatory record, quality of practice and philanthropic work. According to Barron’s, “around 4,000” advisory firms were considered for this recognition in 2020; with about 1,200 firms receiving recognition.

InvestmentNews’ “Best Places to Work for Financial Advisers” award is based on responses to surveys voluntarily completed by the owners and employees of participating firms. Firms do not pay a fee to participate. Best Companies Group conducts the survey. InvestmentNews evaluates participating firms’ ability to attract and retain talented employees and then ranks the firms. To be eligible for the award firms must be a registered investment adviser or broker-dealer; be in business for at least one year and have at least 15 full-time employees. In 2018, 50 firms were named to its list; starting  in 2019, 75 have been named. The award sponsor has not disclosed how many firms were surveyed or considered for this recognition, nor the percentage of total participants that ultimately received recognition.

Awards referenced herein do not consider or evaluate investment performance, or client experience or satisfaction, and therefore are not indicative of such. Awards generally only recognize companies that voluntarily choose to participate. Recognition is generally based on information submitted by the participating organizations. Adviser Investments does not  pay to participate in any of the awards referenced above. Please visit https://www.adviserinvestments.com/awards-and-recognitions/ for more information on awards and recognition received by Adviser Investments.