Vanguard’s ETFA type of security which allows investors to indirectly invest in an underlying basket of financial instruments (these may include stocks, bonds, commodities or other types of instruments). Shares in an ETF are publicly traded on an exchange, and the price of an ETF’s shares will fluctuate throughout the trading day (traditional mutual funds trade only once a day). For example, one popular ETF tracks the companies in the S&P 500, so buying a share of the ETF gets an investor exposure to all 500 companies in the index. Blitz

On September 9, Vanguard launched nine new ETFsA type of security which allows investors to indirectly invest in an underlying basket of financial instruments (these may include stocks, bonds, commodities or other types of instruments). Shares in an ETF are publicly traded on an exchange, and the price of an ETF’s shares will fluctuate throughout the trading day (traditional mutual funds trade only once a day). For example, one popular ETF tracks the companies in the S&P 500, so buying a share of the ETF gets an investor exposure to all 500 companies in the index. tracking S&P market indexes. Eight of the nine were launched concurrently with institutional class shares, while the ninth, the S&P 500 ETF, realizes Vanguard’s long-held desire to introduce an ETF class of its flagship 500 Index fund. They followed this up a week later on September 16 by launching a series of seven ETFs (also with associated institutional shares) tracking Russell market indexes.

We first mentioned Vanguard’s aggressive ETF blitz in the June 25 Adviser Fund Update, when Vanguard unveiled its plan to introduce 20 new ETFs. Most of the offerings track the same indexes as existing iShares ETFs, but at a lower price (see table below). The lower expense ratios, in combination with free ETF trades for Vanguard brokerage clients, instantly make the fund giant a major competitor in the ETF market. 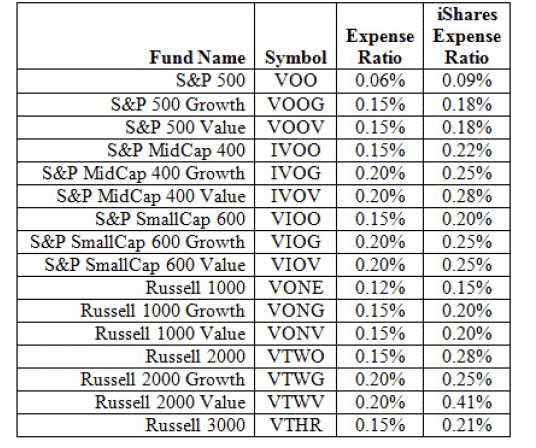 With the launch of the Russell ETFs, Vanguard has released all but four of the planned 20 additions to their lineup; still to come are the Global ex-U.S. REIT ETF (the only of the 20 to be paired with a new investor class fund) and three municipal bondA financial instrument representing an IOU from the borrower to the lender. Bond issuers promise to pay bond holders a given amount of interest for a pre-determined amount of time until the loan is repaid in full (otherwise known as the maturity date). Bonds can have a fixed or floating interest rate. Fixed-rate bonds pay out a pre-determined amount of interest each year, while floating-rate bonds can pay higher or lower interest each year depending on prevailing market interest rates. ETFs. Those additions should appear later this year or in the first part of 2011.

In an upcoming update, we’ll take a closer look at the new ETFs, many of which have overlapping holdings and objectives. Our analysis has shown us, however, that despite the similarities, the process by which S&P, Russell and MSCI (as you may know, Vanguard already has a full line of MSCI ETFs treading much of the same ground) select stocksA financial instrument giving the holder a proportion of the ownership and earnings of a company. for their indexes and sub-indexes has made a difference in long-term performance.

Vanguard’s new ETFs are certainly a bargain compared to the competition, but, in our opinion, most investors would be better served seeking funds run by managers who have set a higher bar for themselves than simply matching the market (as these ETFs will do) and proven they can clear it.