What Investors Need to Know About Vanguard’s Proxy Policies 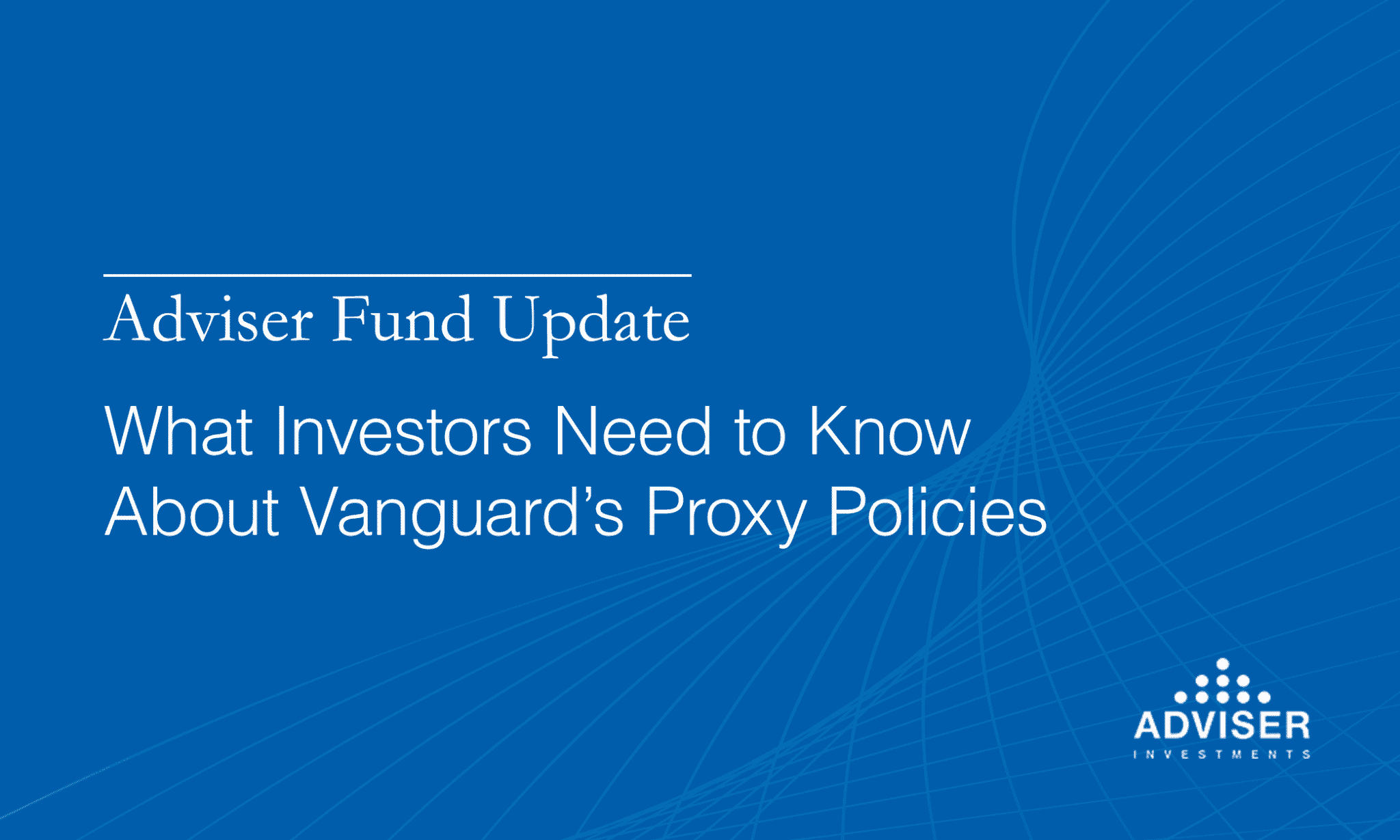 In April, Vanguard announced revisions to its proxy voting guidelines—and included two changes that suggest the Malvern, Pa.-based fund behemoth is more willing to exercise its power over corporate boards and other shareholder control issues than it has been.

Over the past 20 years, the passively managed investment strategies pioneered by Vanguard have taken up a greater and greater share of assets invested in the stockA financial instrument giving the holder a proportion of the ownership and earnings of a company. market, rising from 3% of total assets under management industrywide in 1995 to 37% by 2017 according to a study by the Federal Reserve Bank of Boston. More recent estimates put the figure even higher; research firm Morningstar calculated that passive funds accounted for nearly 45% of all stock market investments in 2018.

As passive strategies have risen to prominence—and may be heading toward dominance—they’ve begun to attract outspoken critics, who suggest that having so many assets invested this way distorts and undermines some of the most critical functions of the market itself. A corporation’s shareholders are its owners, after all; their watchful eyes on the bottom line help keep extravagance in check, nip governance problems in the bud, and make sure underperforming execs are shown the door. Companies running passive funds, detractors say, simply don’t have the incentives in place to spur such vigilance, since they generally allocate their holdings (or are required to by mandate) to mimic an index regardless of the individual performance of the stocksA financial instrument giving the holder a proportion of the ownership and earnings of a company. within it.

Proxy votes are a powerful tool shareholders can exercise to nudge corporations in their preferred direction. These votes are the process by which shareholders in a company elect directors to the board and give their assent to other corporate actions, including mergers and acquisitions and stock compensation plans. Shareholder activism has been ramping up in recent years, with proxy votes being used to stack boards with new directors in favor of a shakeup to a corporation’s strategy, or to encourage the adoption of more socially conscious policies.

Large investment firms like Vanguard and its peers have tended to side with management in such proxy battles. But Vanguard’s two recent revisions to its proxy policy suggests the firm is gently stepping in the direction of more active participation in the proxy process.

First, effective April 1, the firm announced it will begin voting against board candidates who serve on multiple public company boards. Their reasoning is that, “…directors’ responsibilities are complex and time-consuming. Because of the demands of board and committee memberships, a director can be ‘overboarded.’”

Second, Vanguard announced it would delegate proxy voting rights for its sub-advised funds to the firms it’s hired to manage them, stating that the people with day-to-day supervision over the funds’ portfolio are better positioned to cast the ballots, and in recognition of how corporate governance standards “have matured over the years.” One side effect of this policy, however, could be that managers who overlap on holdings on Vanguard funds with multiple sub-advisers (think the Vanguard U.S. Growth or Vanguard Explorer funds), might end up canceling out each others’ votes if they have a difference of opinion.

The new proxy policies will affect approximately $470 billion in equityThe amount of money that would be returned to shareholders if a company’s assets were sold off and all its debt repaid. assets across 27 funds, with Wellington Management gaining the most voting power of any Vanguard sub-adviser. Earlier this year, Wellington opposed pharmaceutical giant Bristol-Myers Squibb’s deal to buy rival Celgene in a proxy vote, while Vanguard voted with other shareholders in favor of the acquisition.

In 2018, even Vanguard founder Jack Bogle warned that too much stock invested in index funds could create concentration risksThe probability that an investment will decline in value in the short term, along with the magnitude of that decline. Stocks are often considered riskier than bonds because they have a higher probability of losing money, and they tend to lose more than bonds when they do decline.. The fund company’s baby steps toward more actively flexing their power as shareholders suggests they’re starting to pay more attention to those risks.

Note that mutual fund companies also periodically hold proxy votes; Vanguard’s canvasing of fund shareholders on two investor proposals and trustee appointments in November 2017 is a good example. It is Adviser Investments’ policy to leave proxy voting decisions to our clients—we don’t vote on their behalf.

Politics and Your Portfolio: Focus on Market Cycles, Not Election Cycles

The 2020 primary-to-presidency campaign is provoking more concern about our country’s future than any in recent memory. But from an investing standpoint, our research shows that you can mostly ignore the lofty oratory leading up to and through the election’s outcome.

Focus on Market Cycles, Not Election Cycles, available exclusively from Adviser Investments, compares investment returns during each party’s time in office. We cover how markets perform in a president’s first year, average four-year returns under Democratic and Republican administrations, and the impact of political rhetoric on market volatilityA measure of how large the changes in an asset’s price are. The more volatile an asset, the more likely that its price will experience sharp rises and steep drops over time. The more volatile an asset is, the riskier it is to invest in..

It’s never too soon to learn more about the impact of politics on your investment portfolio. Download this free investment report today!

Every three months, publicly traded companies report their earnings—and every three months, Wall Street traders try to predict, bet on and react to those reports. But how much attention should investors pay to all the drama of “beats” and “misses?”

In this episode of The Adviser You Can Talk To Podcast, Deputy Director of Research Brian Mackey and EquityThe amount of money that would be returned to shareholders if a company’s assets were sold off and all its debt repaid. Research Analyst Kate Austin break down the ins and outs of earnings season, discussing:

Listen in on the conversation, and click here for “Getting Results: An Investor’s View of Earnings Season.”

About Adviser Investments
Adviser Investments operates as an independent, professional wealth management firm with expertise in Fidelity and Vanguard funds, actively managed mutual funds, ETFsA type of security which allows investors to indirectly invest in an underlying basket of financial instruments (these may include stocks, bonds, commodities or other types of instruments). Shares in an ETF are publicly traded on an exchange, and the price of an ETF’s shares will fluctuate throughout the trading day (traditional mutual funds trade only once a day). For example, one popular ETF tracks the companies in the S&P 500, so buying a share of the ETF gets an investor exposure to all 500 companies in the index., fixed-income investing, tactical strategies and financial planning. Our investment professionals focus on helping individual investors, trusts, foundations and institutions meet their investment goals. Our minimum account size is $350,000. For the sixth consecutive year, Adviser Investments was named to Barron’s list of the top 100 independent financial advisers nationwide in 2018 and made its list of the top advisory firms in Massachusetts for the seventh year in a row in 2019. We have also been recognized on the Financial Times 300 Top Registered Investment Advisers list in 2014, 2015, 2016 and 2018.

The Adviser You Can Talk To Podcast is a trademark of Adviser Investments, LLC. Registration pending.