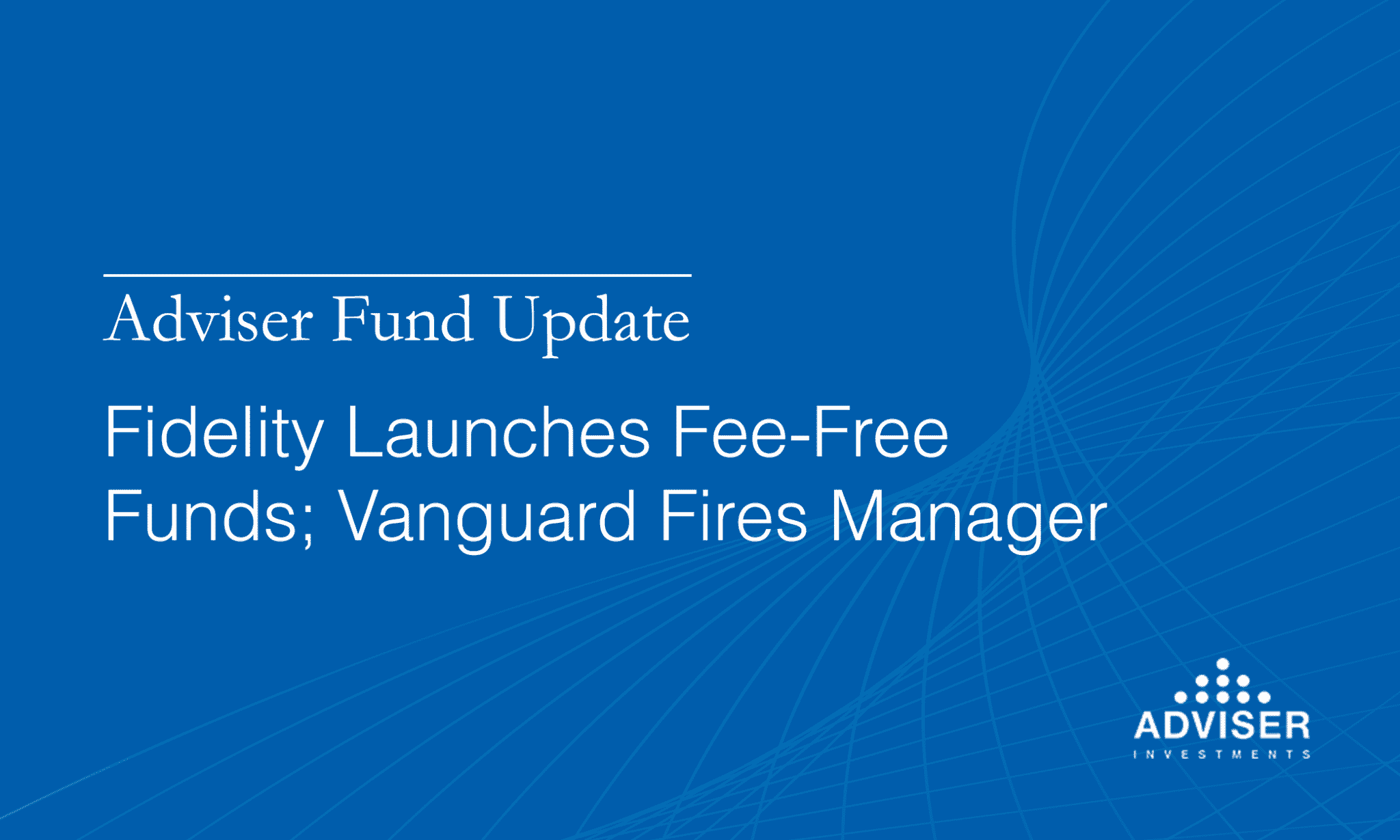 Is it time to crown a victor in the fee wars? In what it touts as “rewriting the rules of investing,” Fidelity has launched the first index funds with zero expense ratios for individual investors.

For years, we’ve been covering the battle between Vanguard, Fidelity and other competitors to claim the lowest fees in the marketplace. Last month, we discussed how Vanguard was offering investors (or traders) on its platform the ability to buy and sell about 1,800 ETFsA type of security which allows investors to indirectly invest in an underlying basket of financial instruments (these may include stocks, bonds, commodities or other types of instruments). Shares in an ETF are publicly traded on an exchange, and the price of an ETF’s shares will fluctuate throughout the trading day (traditional mutual funds trade only once a day). For example, one popular ETF tracks the companies in the S&P 500, so buying a share of the ETF gets an investor exposure to all 500 companies in the index. without paying transaction fees. Now Fidelity’s won the fee race to zero.

The funds aren’t exactly the index funds investors have grown accustomed to, but are rather what Fidelity calls “self-indexing” funds. What’s that mean?

Flash back to early June, when Fidelity filed paperwork with the SEC registering for these proposed funds, which were then unnamed and had no mention of the zero-fee game-changer.

It’s a growing trend in the industry. Fund sponsors are beginning to develop proprietary in-house indexes to keep expense ratios down by saving money that would otherwise go to licensing indexes from third parties such as Standard & Poor’s, FTSE or MSCI. The ZERO funds will track Fidelity’s U.S. Total Investable Market Index and its Global ex U.S. Index, each of which were launched in March.

ZERO Total Market Index will attempt to track U.S. Total Investable Market Index, comprised of the largest 3,000 publicly traded U.S. companies. ZERO International Index will seek to follow its Global ex. U.S. Universe Index benchmark, which contains the top 98% of companies by market capitalization in developed and emerging foreign stockA financial instrument giving the holder a proportion of the ownership and earnings of a company. markets.

What’s that mean for investors in the existing Fidelity funds—the $55.4 billion Total Market Index fund, which tracks the Dow Jones U.S. Total StockA financial instrument giving the holder a proportion of the ownership and earnings of a company. Market index and the $23.4 billion International Index fund, which follows the MSCI EAFE index?

Effective August 1, Fidelity dropped the fees on those funds dramatically upon announcing the zero-fee options. Expenses on retail shares of Total Market Index dropped to 0.015% from 0.09%, while fees on International Index went from 0.16% to 0.045%. At that price, investors probably wouldn’t notice much in savings compared to a zero-fee fund, but the cost reduction might be enough to keep investors from jumping to the new funds and taking the hit on capital gains for access to fee-free investing.

All told, Fidelity cut fees on existing index stock and bondA financial instrument representing an IOU from the borrower to the lender. Bond issuers promise to pay bond holders a given amount of interest for a pre-determined amount of time until the loan is repaid in full (otherwise known as the maturity date). Bonds can have a fixed or floating interest rate. Fixed-rate bonds pay out a pre-determined amount of interest each year, while floating-rate bonds can pay higher or lower interest each year depending on prevailing market interest rates. funds by an average of 35% and got rid of investment minimums on those products across the board.

Of note, these new products are only available to retail, do-it-yourself investors who purchase shares through a Fidelity brokerage account. And in the small print, something we don’t ever recall seeing in a fund prospectus before: “The fund may impose a purchase maximum” limiting the ability of shareholders to add additional shares when their account balance or total purchases exceed an unspecified dollar threshold. In other words: No free lunch for professional wealth managers or institutions.

So now that investors can own the U.S. stock market or nearly all of the stocksA financial instrument giving the holder a proportion of the ownership and earnings of a company. in the world for just the cost of shares in the fund, what does that mean for the rest of the industry? Zero-fee investing makes for a pretty powerful marketing claim by Fidelity. It wouldn’t surprise us one bit to see other fund companies follow suit.

While lower fees are a clear win for investors, at this point the fund industry is splitting basis points (one basis point is one-hundredth of one percent, or 0.01%). The fee competition between Vanguard, Fidelity, Charles Schwab and BlackRock’s iShares unit has been intense over the past several years—all of the companies already offer broad market index funds (or ETFs) with expenses under five basis points (0.05%) but Fidelity’s move is a headline-grabber at the very least and a possible sign of more to come.

At the end of the day, it’s a good time to be an investor—you can get exposure to stocks across the globe at low-to-no cost. Our hope is that now that we’ve reached zero costs on index funds, companies will start competing more on the fees they charge for active management.

And now, let the race for negative fees begin!

That’s a fund giant to do when it becomes clear that all that glitters is not gold? If you’re Vanguard, you shake things up by changing managers and even the very nature of the fund.

This is a major overhaul, turning the formerly metals-and-mining-heavy fund into a value-oriented fund with a market-timing component.

The move comes in the midst of a prolonged slump for gold and silver investors, and it’s not the first time Vanguard has attempted to distance the fund from a perceived overreliance on gold. In 2001, it removed the word “gold” from what was then known as Vanguard Gold and Precious Metals.

White will oversee a fund with a new investment mandate. Prior to the change, Precious Metals and Mining’s strategy was to invest 80% in mining companies and 20% directly in precious metals. Global Capital Cycles will invest at least 25% in precious metals and mining companies and the rest in stocks of companies that White believes are unpopular or where capital spending is declining. It can also allocate substantial assets to cash if White sees fit.

The new name reflects the fund’s adherence to a “capital cycles” strategy as its primary investment methodology, looking to find opportunities in commodity-oriented industries (think materials and natural resources) that follow cyclical patterns. In addition, it includes a focus on companies that own irreplaceable or scarce resources used in telecommunications and utilities.

White has focused on capital cycles while running long/short strategies during his 11-year tenure at Wellington. He is also a co-manager on John Hancock’s $800 million Seaport Long-Short fund, which allocates 20% of its assets to a capital cycles long/short strategy. Since its December 2014 inception, that fund has outperformed peers in the long/short category but also dramatically underperformed the MSCI World Index against which John Hancock measures it.

In a press release, Vanguard touted the move as responsive to investors looking to complement their core stock portfolio with a fund that has lower correlations to the broad equityThe amount of money that would be returned to shareholders if a company’s assets were sold off and all its debt repaid. markets. Unlike the Hancock fund, Global Capital Cycles will not take short positions.

Maybe Keith White can stabilize the ship. But the past declines here have been agonizing, unpredictable and long-lasting. That’s why we’ve steered clear of direct investments in the gold and mining sector to date.

The fund’s new mandate may help diversify holdings, but the heavy reliance on timing capital cycles and the price of commodities could still make for a turbulent ride—one that most investors may not be comfortable taking. It remains to be seen if the changes truly improve the investor experience or are just a face-lift for a sagging portfolio.

Vanguard hasn’t revealed what Global Capital Cycles’ benchmark will be, but Wellington will be subject to a performance fee. Look for the new strategy to be in place along with the new name by the end of September.

All told, this is essentially a new fund with a heavy value tilt. We’ll see if investors will give it a shot.

The other announcement at the end of July saw Vanguard give M&G’s Matthew Vaight the axe from Emerging Markets Select Stock, replacing him with three managers from Scottish money management firm Baillie Gifford—Richard Sneller (head of emerging markets equitiesThe amount of money that would be returned to shareholders if a company’s assets were sold off and all its debt repaid.), Andrew Stobart and Mike Gush.

Sneller heads a nine-person investment team and has helmed Baillie Gifford’s emerging market equity group since its 1994 inception. Their philosophy is to look for businesses with sustainable competitive advantages and have the potential to grow their earnings faster than the market average.

Emerging Markets Select Stock is another Vanguard fund that employs a multimanager approach, something we’re not all that keen on. With four different sub-advisers making investment decisions, Vanguard may be reducing “manager riskThe probability that an investment will decline in value in the short term, along with the magnitude of that decline. Stocks are often considered riskier than bonds because they have a higher probability of losing money, and they tend to lose more than bonds when they do decline.” of a single manager unexpectedly leaving or making a bad bet that capsizes the entire portfolio. But it also can limit the ability of any one manager to add extra value. And investors have less control over who is managing their money when Vanguard can hire and fire managers at will.